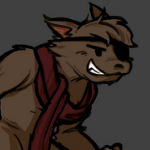 Sup fellas it's me, Academyjr64. But you'll probably never call me by that name.

On ROBLOX, I go by owningnoobs76, and occasionally play alongside RaiderAie who is the actual owner of this profile. But for this wiki, owning is the one who does the business.

On Discord, I go by official clown business , but sometimes change my handle for random reasons.

Hello, this is official clown business, and this is the thirty-fourth episode of my Frontier weapon guide.

In this episode, we're covering the thirteenth and final weapon in the ranged category - the Ratboy Handgun.

It is unlocked once the player collects at least half of the Nightmare collectibles and either purchases it outright with 25 million gold, or acquires it as the rarest possible reward from the Circus boss.

Taking inspiration from real-world handguns such as the M1911, the Ratboy Handgun was manufactured by an ancient Ratboy civilization - formerly a bustling hub rife with technology, now an almost entirely extinct race, with the handgun serving as a relic of past times. While the M1911 is chambered in the powerful .45 ACP round, this pistol represents its strength with the stopping power of the ubiquitous Bullet it uses as ammunition, as well as its status as the first known incarnation of a self-loading firearm in the Fantastic Frontier's history.

In-game, the Ratboy Handgun's power is very high indeed. With a base damage of 500 at any range and a 100% usage of bonus Ranged damage, only the Gnome Rocket Launcher provides significant competition when it comes to raw strength. This also makes the handgun the most efficient weapon by far when it comes to the usage of its Bullets.

The special attack of the handgun, Divine Shot, conjures a bullet to fire a deadly shot at an elevated 675 damage - but any target with lower than a seventh of their health will be instantly killed in a single shot.

Rate of fire is very respectable for a ranged weapon of this caliber, capping out at roughly 80 rounds per minute, and stamina usage is simiarly low, spending about 2 per shot (or none when using Divine Shot). However, a savvy player might be able to take advantage of the action-canceling ability to elevate the firecap to almost double the amount, albeit at the cost of a significantly increased stamina consumption.

There are no movement penalties, recoil, or reloads to factor in with the Ratboy Handgun. You'll move at 100% of your current speed (whether walking or sprinting) while firing the handgun, and as with all other weapons, there is no magazine or clip to replenish after firing plenty of shots from the weapon.

Despite its appearance as a small firearm, potentially used for backup, the Ratboy Handgun is more than a match for even the strongest of weapons in the Frontier, and its many strengths allow it to go toe-to-toe with any boss - as expected for a weapon with such a steep price tag.

The handgun is a weapon that can handle anything thrown at it, and as such, it will work with virtually any equipment set. However, we will be focusing on using similarly expensive armor and accessories to fully expand on the potential of the weapon.

Of course, for armor, the choice is fairly obvious - you'll need additional damage as well as endurance to further sustain the stopping power of the handgun. To that end, we'll be making full use of the Forgotten Life armor set, with each piece providing an increase of 65 to all damage types and a 14% improvement to your endurance, as well as the level of armor needed to survive even the most brutal of attacks should the need arise.

In addition, you'll need equipment that increases your mobility in order to avoid taking heavy damage from stronger opponents. Consider the Spider Stilts or either pair of Wings for this, and elect the use of damage-increasing equipment in the opposite slot. Your choice of neck equipment is entirely based on personal preference.

The Hightower Ring is the obvious choice for your next accessory, granting 35 points of ranged damage and an extra 3 points of defense, but some players may find the Tough Green Ring an unconventional favorite for its 10% increase in endurance.

Miscellaneous equipment boils down to two choices - damage or financial gain. The Brain Monocle's 30 ranged damage will further add to the already high damage output of the handgun, but the Front Bullet Pack will preserve half of all Bullets fired, effectively halving their cost and allowing the player to have more gold on hand for future purchases.

The Ratboy Handgun is a devastating ranged weapon, replete with a startling lack of downsides. Few weapons can put rounds into the target as quickly and as effectively as the handgun, and it competes fiercely with the Gnome Rocket Launcher for having the most damage-per-second in the entire game. It is the perfect weapon for slaying boss monsters due to the specific design of the special ability. And, with no reload or slowdown in between shots, there's no chance the player will be left vulnerable in combat.

With a proper loadout that draws on the strengths of the handgun, its effectiveness will be preserved at any distance and in any situation, no matter who uses it.

While most bosses are ready to deal with players and pests alike, no one will ever expect a determined rat with a gun-

-and it'll prove to be more than just a mere rodent infestation.

Thank you very much for reading.

Join me next week, when I'll be covering the Honoring Blade.

Check out these stat tables below me. Rate is measured in attacks per second, and Damage, DPS, and Spec are based off the bonuses of 0, 100, and 300.

Retrieved from "https://fantastic-frontier-roblox.fandom.com/wiki/User:Academyjr64?oldid=81014"
Community content is available under CC-BY-SA unless otherwise noted.