For more information regarding other towns, see Safe Zones.

In Topple Town, the player may be aware of the telescope that shows the player The Town of Right and Wrong. Near The Golden Coin, there's a telescope that can be interacted with by the player. The player will soon see the glowing rock formation at Celestial Peak if used.

The Grand Castle is a large castle where a black and white-checkered gate prevents the player from entering. Currently, as of the 0.915a Update, the players can't interact with the castle, nor its doors. This site may be the home of the king or queen of The Town of Right and Wrong, however, it's unknown what its purpose is. 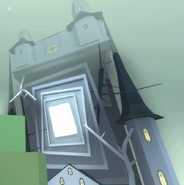 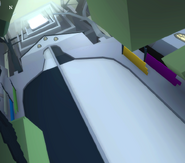 The Inn Behind All Those Doors

Like the Red Ogre Inn, the Inn, although nameless, can be found to the right of the fountain of the Town of Right and Wrong. There are two ways to get in and out of the Inn. The first one being near the fountain. The second one can be found near Captain Finnegan's airship. The innkeeper of the Inn is simply named Innkeeper. If the player wants to rest at the Inn, they must pay a fee of 1,000 gold to restore their health during the nighttime.

In the Town of Right and Wrong, there is only one purchasable home that the player can purchase. The Black Tower is sold by Realtor Reynold and contains 60 storage slots, a smithing station, a drop-portal to Topple Town, a fishing well, and some rooms. The cost of the Black Tower is 5,000,000 gold. 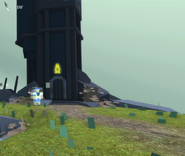 In The Town of Right and Wrong, there are some mysteries located inside of it.

Nicknamed as Dr. Seuss, this NPC's purpose is unknown. He wears a tall striped hat, as well as clown-like attire. He seems to be a boss of some sorts, but its intentions are currently unknown. 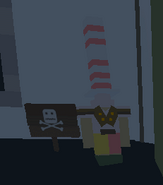 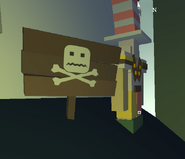 All players should recognize the iconic Rat Boy whenever they die. There's another NPC that looks very similar to Rat Boy, except it's covered in a paint of gold. He appears to be resting in the Inn, but his purpose is still unknown.

The Dancer is a green-clothed dancer that dances with the Magic Radio. He's currently the only person in-game who sells a gamepass item. He only sells the Magic Radio, at a price of 300 ROBUX.

Like Big Box, Little Chelli can buy the player's items for gold. He can be found near the fountain, next to The Inn Behind All Those Doors.

The Otherworldly Weaponsmith is a merchant from another world, selling very powerful weapons. Most of his items are either melee or magic weapons and are very pricey. These weapons are either spellbooks or melee weapons with special abilities. These spellbooks may be the Greater Storms Spellbook or the Celestial Power Spellbook.

The Spirit of Commerce is one of the four spirits that allows the player to increase their maximum health pool permanently by 100. He's currently the most expensive and the easiest to find. For an increase in health pool, the player must pay a price of 2,500,000 gold.

Retrieved from "https://fantastic-frontier-roblox.fandom.com/wiki/The_Town_of_Right_and_Wrong?oldid=12550"
Community content is available under CC-BY-SA unless otherwise noted.