The Object From Earth

The Object From Earth is one of the most sought-after collectibles adventurers look for, but perhaps one of the more 'easily attainable' harvestables that players can do to acquire the collectible as soon as they can.

The Object From Earth can be found in various locations in the Frontier, centralized mostly within A Frontier of Dragons. They are often found on colorful rocks and trees that can be seen in the zone. Most of these spots typically require jump-boosting or flight equipment such as the Spider Stilts, Angel Wings/ Dark Angel Wings or Salamanders/ Gnome Rocket Launcher. Other places where The Object From Earth may be seen at are the following:

Unlike other rare harvestables such as the Rising Star Mushroom or the Grateful Frog, The Object From Earth can also be obtained from other sources. These include the following:

What The Object From Earth is based off on remains unclear as it may resemble a distorted rock-throwing slingshot by some whereas others may interpret it as an imitation of a destroyed space probe. Regardless of its bizarre appearance, it is clear that the object possess very distinctive features. The object has four rocks in total - two being attached to both ends of where the 'branch' ends, one appears to be levitating in-between the 'branches', and the smallest rock can be seen on the other end of the bottom 'branch'. A thin, white stem can be seen standing firmly underneath the 'branches', seemingly as if it is weightless.

Besides being sold at a value of 333,333 gold, an adventurer can turn in The Object From Earth to Slayer at Topple Town in exchange for 999,999 gold, or for a Collector's Cap (Slayer's Tasks). This can only be exchanged if the adventurer have the task card active and unlocked the Expert tier beforehand. In addition, these rewards will depend based on what was randomly given to the adventurers after the interactions for another task. 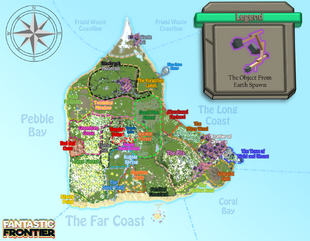 A map of all, if not, most of the known spawns of The Object From Earth.
Add a photo to this gallery

Retrieved from "https://fantastic-frontier-roblox.fandom.com/wiki/The_Object_From_Earth?oldid=88762"
Community content is available under CC-BY-SA unless otherwise noted.