The Tag Red Lazer is one of the various feet-based equipment that can be acquired by the players on the island of Matumada. It can be purchased from Construct at a price of 10,000,000/7,000,000 gold. The Tag Red Lazer can also be obtained as a possible reward from one of Giant Toad's Tasks.

In appearance, the Tag Red Lazer are almost flat shoes made up of what appears to be solidified laser beams. Inside of them is three glowing rectangular beams encased by red glass. When the player equips the shoes, they will begin to emit a red aura, leaving a trail of red clouds behind their tracks.

When equipped, the Tag Red Lazer will provide 9 armor points, slightly increasing the player's protection. It will also provide 7 walkspeed and jump boost points, allowing the player to move faster and jump higher than usual. Other than that, it can be sold to a selling vendor at a selling price of 2,500,000 gold. 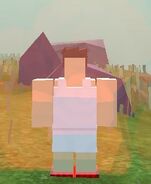