The Strangeman's Domain is a vast, empty, spherical domain located in a different dimensional plane away from the Frontier. As its name implies, it is the domain of where the Strangeman resides in, a strange vendor selling various items that adventurers may seek from it, such as the Skip Tickets or the Frontier weapons.

In order for an adventurer to access the Strangeman's Domain, they must come across a glowing, purple orb hovering over the cracks in the ground ripped open by the immense power of the orb. The Strangeman's Orb does not have one specific spot, but instead, is relocated to random spots in the Frontier. Its relocation occurs at night, so the orb will momentarily be available in one area of the Frontier before it shifts to another area in the Frontier. 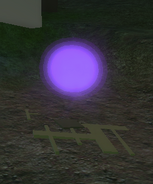 Strangeman's Orb (portal access)
Add a photo to this gallery

Retrieved from "https://fantastic-frontier-roblox.fandom.com/wiki/Strangeman%27s_Domain?oldid=96228"
Community content is available under CC-BY-SA unless otherwise noted.