The Strange Creature Ring is a ring equipment that can be obtained in the Frontier. It is acquired via purchasing it from Amy Thistlewitch located in Blackrock Mountain at a price of 880,000 gold. There are other viable methods of acquiring a Strange Creature Ring, such as:

Strange Creature Ring is described to be a gold and bronze ring possessing a strange totem, as implied by its description. In the center, the totem appears to share similar facial features of a Whisperer.

When equipped, the Strange Creature Ring will enable the players to have glowing purple eyes if the face isn't obscured by something. It is mainly used by magic-based users who prefer to have a decent amount of additional damage to their magic weapons. Although the Scorched Soul's Ring provides more magic damage, the Strange Creature Ring serves as a substitute if the player does not want to risk losing their health over time. 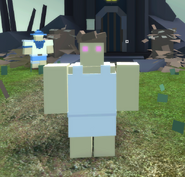 A player wearing the Strange Creature Ring
Add a photo to this gallery
Retrieved from "https://fantastic-frontier-roblox.fandom.com/wiki/Strange_Creature_Ring?oldid=95451"
Community content is available under CC-BY-SA unless otherwise noted.