The Spikers are small, hostile living-bombs sharing similar appearances to a mechanical bee-like creature. They are typically found anywhere in The Nightmare, especially in obscured spots of The Mansion, The Grand Hall, and The Theatre.

The drop rates of every single collectible that can be acquired from the Spiker. Any claims of "missing items" that the Spiker could drop will be cast aside as false information.

To detect and find the mob, the players should be very cautious as they enter rooms and explore their surroundings. These Spikers tend to be in spots behind wooden panels in rooms, hanging underneath ceilings, and so forth. It can also be detected through the sound it produces if it senses a nearby player, serving as a great indicator of the Spiker's location. It is recommended to use Salamanders as the attacks can pass through walls. 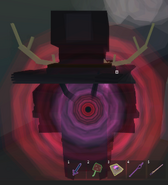 The player after being struck by the Spiker and surviving.
Add a photo to this gallery
Retrieved from "https://fantastic-frontier-roblox.fandom.com/wiki/Spiker?oldid=90332"
Community content is available under CC-BY-SA unless otherwise noted.
FandomShop Newsletter Join Fan Lab