The Running Man is a moving 'harvestable' that can be found anywhere in the Nightmare, often running about into walls, props, and so forth.

In appearance, the Running Man appears to be a sponge-like humanoid figure with light-blue skin, long arms, thin legs, and a pale, blank expression on its face. Its attire is comprised of a pair of gray shorts, a green tie, a thin black belt, and brown shoes.

The Running Man can be handed over to Toaster Josh in exchange for an Ancient Key, unlocking more areas that players can explore in that requires the key. Other than that, the Running Man can be sold to a selling vendor at a selling price of 22,000 gold if the players have no further uses for the collectible.

The Running Man can be found in various places in the Nightmare, specifically found in certain spots that include but are not limited to: 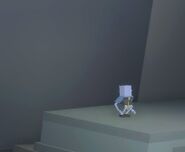 An idling Running Man.
Add a photo to this gallery
Retrieved from "https://fantastic-frontier-roblox.fandom.com/wiki/Running_Man?oldid=81093"
Community content is available under CC-BY-SA unless otherwise noted.