One of the rarest of all known harvestables, the Rising Star Mushroom is the most sought-after harvestable by most parts of the community. As its caption implies, it spawns in high altitudes, although it is possible to find the harvestable at lower altitudes. Due to the immense rarity of the mushroom, not all of the spawns are known to the public.

The Rising Star Mushroom is described to be an amazing-looking mushroom with several distinctive features. It is mainly noticeable by its yellow, shiny glow, as well as its white center.

It is possible for players to exchange the Rising Star Mushroom for rewards during Slayer's Tasks if the task card is currently active. Other than that, it can be sold to a selling vendor at a selling price of 1,000,000 gold.

This list will compile a list of known locations of where a Rising Star Mushroom might be found at or in. These locations are confirmed by the community and are widely used by other parts of the community to assist others as they find the harvestable of immense rarity.

If you prefer to view a map to see all of the known spawns of the Rising Star Mushroom, click on the map below to see it in full view. Thanks to 1rubberducky2 for doing this out of courtesy~! 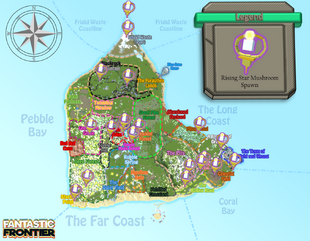 A map of all, if not, most of the known spawns of a Rising Star Mushroom.
Add a photo to this gallery

On the cliff hangar in Ancient Forest (near Topple Lake)

On the edge of Frigid Waste(PvP)
Add a photo to this gallery
Retrieved from "https://fantastic-frontier-roblox.fandom.com/wiki/Rising_Star_Mushroom?oldid=79882"
Community content is available under CC-BY-SA unless otherwise noted.