The Ratboy's Nightmare Update is the third major content update implemented into the game, Fantastic Frontier. Its initial release was on October 19, 2018, and follows after the events of the 1.10 (Fishing) Update. The Ratboy's Nightmare Update focuses on a new world known as the Nightmare, a horrid and nightmarish dimension that keeps the Giant Ratboy in a coma-like state. Players will traverse through the horrors of the Nightmare and encounter various creatures and obstacles that threatens the safety of the Frontier. It also brought other features to the Frontier, such as Gardening.

If you're looking for specific topics/subjects added during this update, please refer to the category, Ratboy's Nightmare Update (click the link).

Includes a list of known changes, additions, and/or removals that were made post-release.

A game thumbnail showcasing various zones in the Nightmare. From left to right, the following zones is shown: The Theatre (left), The Supermarket (center), and The Deli (right).

The first teaser. Celebrates the 1-year anniversary of Fantastic Frontier on July 16, 2018. Showcases an old version of The Deli.

The third teaser. Showcases The Theatre, one of the various zones in the Nightmare.

The fourth and final teaser. Showcases the Giant Ratboy fallen on the hillside of Topple Hill.

Poster of the Ratboy's Nightmare Update. 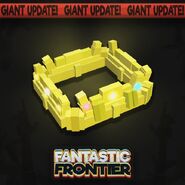 The addition of a new collectible, The Crown (October 20, 2018)
Add a photo to this gallery

Retrieved from "https://fantastic-frontier-roblox.fandom.com/wiki/Ratboy%27s_Nightmare_Update?oldid=77657"
Community content is available under CC-BY-SA unless otherwise noted.