In appearance, the Ranger's Backpack is an odd-looking backpack with an ammo belt attached to the upper parts of the backpack. A small gun-like tube can be seen as an extension at the very top - possibly a scope of some sorts. 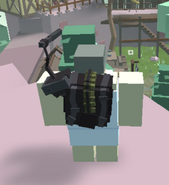 A player wearing Ranger's Backpack
Add a photo to this gallery
Retrieved from "https://fantastic-frontier-roblox.fandom.com/wiki/Ranger%27s_Backpack?oldid=62108"
Community content is available under CC-BY-SA unless otherwise noted.