The Rabbit Hole is a new location introduced in the 1.10 (Fishing) Update. It serves as a place for both fishing purposes, as well as a place where players can rally to fight the boss known as the Parasite.

The Rabbit Hole can only be accessed via a portal that moves across the Frontier during the nighttime, similar to how the traveling shopkeepers work and move around in the Frontier. Inside of the Rabbit Hole, a variety of harvestables and birds can be found.

In addition to this, there is also a fishing pool at the center, as well as a very long rope to allow the players to escape the Rabbit Hole. The fishing pool serves as the area where the Parasite will spawn at night. The Parasite is considered to be a challenging mob and as such, players may need the assistance of others to defeat it.

In order to get out, one must interact or climb the rope that seemingly leads to nowhere. From there, they will return back to the Frontier from the exact spot they entered from.

Birds that can be found in the area include Blackbird, Black Dragonbird, Glowbird, and the Red Dragonbird.

Harvestables that can be found in the Rabbit Hole include Bobber Mushroom, Lool Flower, Nightmare Mushroom, and the Traveler Plant.

The only mob that can be found in the Rabbit Hole is the Parasite boss.

These are the currently known locations that are listed in this article. These will mainly depict the "entrance" of the Rabbit Hole that is found in different parts of the Frontier each night. You can help by commenting on this article as to where it can also be found.

If you prefer to view a map to see all of the known spawns of the Rabbit Hole, click on the map below to see it in full view. Thanks to 1rubberducky2 for doing this out of courtesy~! 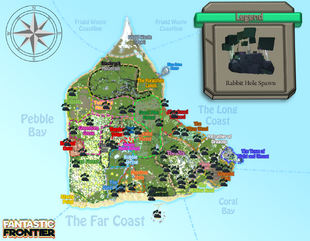