Punk is a standalone armor piece that can be acquired on the island of Matumada. The Punk can be purchased from the Construct at a price of 2,500,000 gold. It can also be obtained as a possible reward from one of Giant Toad's Tasks.

In appearance, Punk appears to be an odd, blue headpiece with a wire-like object pointing up from the top of the cube. The cube structure in the middle has an almost face-like appearance in the front. It is connected to the player's head through a lighter blue block. Its appearance is almost like that of a Fear, besides its blue color and slightly different shape.

When equipped, Punk will make the player lose 8 armor points, causing the player to be more vulnerable. They will also receive an additional 80 points to magic damage-types and 40 points to melee damage-types, increasing the number of damage inflicted on opponents while using magic or melee weapons. 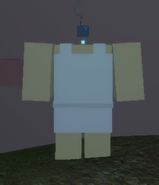 A player wearing the Punk.
Add a photo to this gallery
Retrieved from "https://fantastic-frontier-roblox.fandom.com/wiki/Punk?oldid=68692"
Community content is available under CC-BY-SA unless otherwise noted.