In appearance, it is a simple mask mimicking the face of the Plasma Ghost. Other than that, there is not much else to say about its appearance. 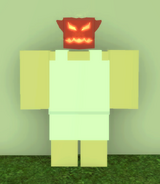 A player wearing the Plasma Ghost Mask.
Add a photo to this gallery
Retrieved from "https://fantastic-frontier-roblox.fandom.com/wiki/Plasma_Ghost_Mask?oldid=89412"
Community content is available under CC-BY-SA unless otherwise noted.