Orb to Inside (Trapdoor)

There are three different environments that the players may be taken to, based on the object they had interacted with (the trapdoor or the orb):

If the orb takes the players to a scenario known as the Power Lamp Surgery. Players will have to play the role of Mickey, a 'medical expert' skilled in the surgery of lamps, how the process works, who knows for sure? The objective of Mickey (the players) is to retrieve the correct lamp out of the many fake lamps provided in the room. Interacting with fake lamps causes them explode, taking away large portions of the player's health points, which can easily devastate poorly-equipped players. After the players have acquired the correct lamp, they may interact with a toaster to return to 'safety'.

Interacting with the trapdoor above the Blue Door's exit in the Inside's attic will take the players to a 'dormant' area of the Pitfall, where a floating carpet-like platform ponders about in the empty abysses of the Nightmare. Small furniture can be seen on the platform, similar to the ones seen in the Inside. Players may or may not encounter enemies in the Nightmare, but if they do, they may either encounter the Red Wolf or The Chewed. If the players had passed the smoke particles and interact with the orb, the players will be taken to the first-riddle room, closest to the Green Door. This acts as a 'shortcut' route for players that do not want to spend time counting accurately in order to get to The Plant Room. 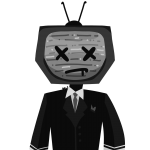