The Otherworld Boots is one of the various feet-based equipment that can be acquired by the players in the Nightmare. It can be purchased from No-Legs in the Inside (Blue Door) at a price of 250,000 gold. Other viable methods of acquiring the Otherworld Boots include the following: 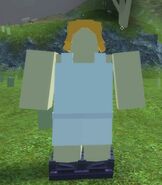 A player wearing the Otherworld Boots.
Add a photo to this gallery
Retrieved from "https://fantastic-frontier-roblox.fandom.com/wiki/Otherworld_Boots?oldid=86230"
Community content is available under CC-BY-SA unless otherwise noted.