As its description implies, it is a red cape with an elegant embroidered design. It shares nearly identical appearances to the Ornate Blue Cape, its other counterpart.

When worn, the Ornate Red Cape will simply be shown on the player's back, however, the players will not receive any benefits from the cape, other than to be used for vanity purposes. 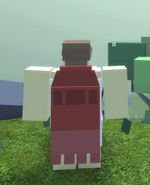 A player wearing the Ornate Red Cape
Add a photo to this gallery
Retrieved from "https://fantastic-frontier-roblox.fandom.com/wiki/Ornate_Red_Cape?oldid=62107"
Community content is available under CC-BY-SA unless otherwise noted.