The Ogre is a hostile humanoid that can be found in various locations of the Frontier. They are described as ogres with green skin that wields a wooden club. They are typically found in areas such as Greenhorn Grove and the Ancient Forest.

It also makes an appearance on the 1st floor of the Otherworld Tower, The Way It Starts, serving as an obstacle as the players progress through the dungeon.

There are three attacks that the Ogre can perform:

The drop rates of every single collectible that can be acquired from the Ogre. Any claims of "missing items" that the Ogre could drop will be cast aside as false information. 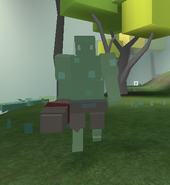