The visage appears to be made out of hardened iron and 'dark iron'-like materials. The visage attempts to capture the face of a menacing, nightmarish humanoid-like entity. Tiny red pupils can be seen in the eyesockets of the visage. Once equipped, large antlers will sprout out of the helmet of what resemble small mechanical wings.

Once equipped, the Nightmare Visage will provide 15 armor points to the players, slightly increasing their protection. In addition, it will also provide 65 additional points to all damage-types, increasing the number of damage players can inflict on their opponents. 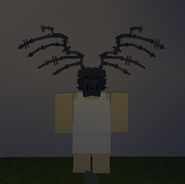 A player wearing the Nightmare Visage.
Add a photo to this gallery
Retrieved from "https://fantastic-frontier-roblox.fandom.com/wiki/Nightmare_Visage?oldid=72706"
Community content is available under CC-BY-SA unless otherwise noted.