The Munsk is a hostile beast that can be found in various locations of the Frontier. They are described to be creatures resembling similar to a reptile with a tree growing on its back. The Munsk are typically seen in various spots of The Pits, but also makes an appearance in areas such as Topple Lake and Great Pine Forest.

There are four attacks that the Munsk can perform:

The drop rates of every single collectible that can be acquired from the Munsk. Any claims of "missing items" that the Munsk could drop will be cast aside as false information. 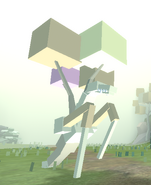 A Munsk roaming The Pits.
Community content is available under CC-BY-SA unless otherwise noted.
Advertisement