The Mountain Totem is one of the many harvestables that can be found on the island of Matumada. They are typically seen by itself on the shorelines of Matumada or on the grounds of the Upper Island on very rare occasions. It can be distinguished from its smaller variations based on the fact that it's quite massive in terms of size, and by the different colors of its counterparts. 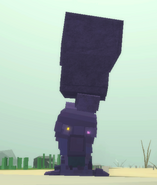 The Mountain Totem as seen in-game.
Add a photo to this gallery
Retrieved from "https://fantastic-frontier-roblox.fandom.com/wiki/Mountain_Totem?oldid=91454"
Community content is available under CC-BY-SA unless otherwise noted.