This article will contain the list of secrets, mysteries, easter eggs, and references that are noted to be found in-game or outside of the game and somehow relates to Fantastic Frontier in general. Each of these easter eggs will be summarized and will be thoroughly be discussed in the article.

Please note that this article is still under construction and may not have all of the reported discoveries as time goes by as more updates are introduced to the community of Fantastic Frontier. You may help this article by commenting on this particular article with images and/or details.

Easter eggs are subjects, topics, and/or ideas that are hidden well in-game, attempts to reference something, located in obscured places, and/or in places where the majority does not pay any attention to while exploring the Frontier. Easter eggs tend to be things that are fun to find or sparks the curiosity of the player, such as the Carrot Gnome in Topple Town or the cardboard cutout of Dennis Reynold in Great Pine Forest. Overall, most of these easter eggs share connections to the game itself.

Mysteries are subjects, topics, and/or ideas that spark the curiosities of many players in the community of Fantastic Frontier. They are typically things that lack solid, clear explanations, often relying on the community to decide why it exists. Overall, these would typically include "lore-essential" landmarks and/or speculations. 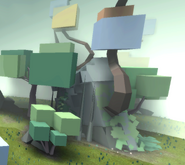 Castle Ruins in A Frontier of Dragons. 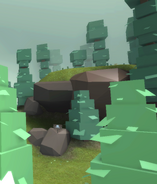 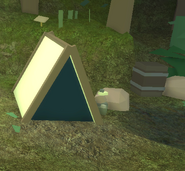 An abandoned tent in the Ancient Forest; near Topple Lake.

An abandoned tent at Blackrock Mountain, near The Forgotten Lands' arches. 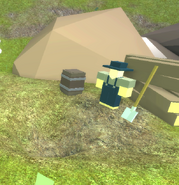 A digsite found next to the Awoken Croc Carl's inn at Farm Fortress.

The Dark Gnome waiting for his plans to be set forth in The Town of Right and Wrong. 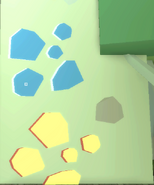 Rocks painted by children in The Town of Right and Wrong, although, where are the children?

An abandoned building in Topple Town, behind the shopping district.

A statue in honor of an unknown leader, possibly a spokesperson of Topple Town. 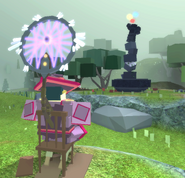 The otherworldly markings seen on the back of Linkman the Junkman.

References are subjects, topics, and/or ideas that attempts to reference another subject/topic/idea, such as video games, media, culture, religions, politics, and practically anything else. References could be references in-game or outside of Fantastic Frontier.

Secrets are subjects, topics, and/or ideas that are noticed by most parts of the community. Unlike mysteries, they are easier to explain and notice while exploring the Frontier and other landmasses.

Any subjects that are not mentioned in-game, but are acquired or seen through exploration or real life & in-game comparisons, such as the vine ladders scattered throughout different areas that players can use to climb on.

A sub-section that compiles the list of easter eggs that were once mysterious, but were simply dismissed to be an ex-mystery that had been cleared up by other details that supports its "resolution".

This section will discuss what was initially planned during the beginning of the development of Fantastic Frontier. Little to no information is known about this and is simply backed up by other source-related files. Here's a list of speculated features/content the developers had developed, but quickly abandoned, revamped, and/or replaced by other features: