The Lava Munsk is nearly identical to that of a 'normal' Munsk, except that it is a reskin to have the color schemes of lava and molten magma. It is also quite small in size, but its agility makes up for its short stature. It can be found in various locations of the Frontier, which can be found in the Infobox besides this sentence. However, it cannot be found in any of the 50 floors found in the Otherworld Tower dungeon.

There are two attacks the Lava Munsk can perform:

The drop rates of every single collectible that can be acquired from the Lava Munsk. Any claims of "missing items" that the Lava Munsk could drop will be cast aside as false information.

Attempting to engage the Lava Munsk up close is an extremely dangerous task, but it is easy to avoid a direct confrontation by simply getting it caught on an obstacle and attacking with any non-melee weapon. Using the 'Head Baiter' method is effective with this mob as well. 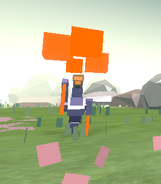 Lava Munsk Roaming near Blackrock Mountain.
Add a photo to this gallery
Retrieved from "https://fantastic-frontier-roblox.fandom.com/wiki/Lava_Munsk?oldid=95970"
Community content is available under CC-BY-SA unless otherwise noted.