Wearer can teleport to the following locations

End of The Road

Wearer sometimes starts tripping, with a chance to trip over Beans.

Wearer may also randomly sprout angry flowers from where they had previously traveled.

Wearer will get forced notifications of new Wiki Announcements as GUI popups.

Dr. Mundo
The Kenneth's Paroxysm Flower Helmet is a standalone Helmet that can only be obtained through the collection of all 3 Tribulation Keys called the Celestial Tribulation Key, the Fractured Tribulation Key and the Agonized Tribulation Key. To retrieve this item not only do you need to locate and find all three keys that are scattered around the Frontier you must also present them to Dr. Mundo found in the Town of Right and Wrong and pay a fee of 200,000,000 gold.
- -

"The governing flower helmet of Kenneth’s paroxysm takes its roots deep in the very foundation of the universe."

This Helmet resembles that of a fully grown Fife Flower residing within a gardening pot, surrounded by smaller and younger Fife Flowers. The flowers are all white with black stems. The largest flower has a face that seems to be in the middle of deciding its next emotion. The flower pot is decorated with mini flower faces around the container. The flowers’ black roots partially pop out of the flower pot as if there was no room for further growth.

Wearer can teleport to the following locations:

If you interact with Mr.Mundo whilst not having found the key after the first dialogue

If you interact with Mr.Mundo whilst not having found the second key after the first dialogue

If you interact with Mr.Mundo whilst not having found the third key after the first dialogue

If you interact with Mr.Mundo after talking to him with Three Keys.

End Dialogue from then on:

An image of the Agonized Tribulation key.

An image of the Celestial Tribulation key.

An image of the Fractured Tribulation key. 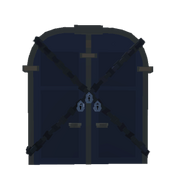 An image of the door with 3 Locks.
Add a photo to this gallery
Retrieved from "https://fantastic-frontier-roblox.fandom.com/wiki/Kenneth%27s_Paroxysm_Flower_Helmet?oldid=65879"
Community content is available under CC-BY-SA unless otherwise noted.