The Hammer Knights are hostile apparitions that are commonly found in all parts of the Great Pine Forest but can also be found in other areas of the Frontier. They are described as apparitions taking on the appearance of a knight. Its limbs are made up of two steel hammers and its head radiates an orange aura.

It also makes an appearance on the 18th floor of the Otherworld Tower, Hammer Foes serving as main obstacles as the players progress through the dungeon.

There are two attacks that the Hammer Knight can perform:

The drop rates of every single collectible that can be acquired from the Hammer Knight. Any claims of "missing items" that the Hammer Knight could drop will be cast aside as false information. 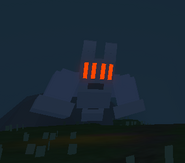