The Grateful Frog is one of the many harvestables that can be obtained in the Frontier. They are considered to be one of the most sought-after harvestables by most parts of the community as it is an item of importance used to complete the Frog Quest, in exchange with rare collectibles.

Grateful Frogs are usually found hanging underneath terrains, objects, trees, and props that are found across the lands of the Frontier. They are found in various locations of the Frontier that includes but not limited to:

Despite its rare spawn-points and occurrences, the Grateful Frog can be obtained as a rare drop from the Purple Ogres, Ogres, and Red Ogres of the Frontier.

The Grateful Frog is a green frog humanoid-like figure trapped in an iron cage. Above the cage is a hook where the cage is hooked and/or attached on an object, terrain, and/or props located in the Frontier.

It is possible for players to exchange Grateful Frog for gold during Slayer's Tasks if the task card is currently active. Players can also exchange 5 Grateful Frogs for rare collectibles during the Frog Quest. Other than that, it can be sold to a selling vendor at a selling price of 100,000 gold.

If you prefer to view a map to see all of the known spawns of a Grateful Frog, click on the map below to see it in full view. Thanks to 1rubberducky2 for doing this out of courtesy~! 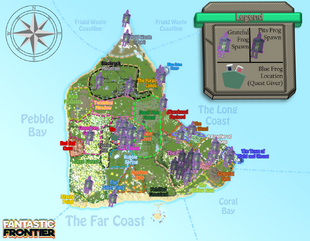 The map showing all, if not, most of the known spawns of a Grateful Frog.
Add a photo to this gallery

Retrieved from "https://fantastic-frontier-roblox.fandom.com/wiki/Grateful_Frog?oldid=83861"
Community content is available under CC-BY-SA unless otherwise noted.