750 - 1,500
The Giant's Corn is one of the eight plants that can be cultivated and harvested by the players from gardening, a feature introduced during the Ratboy's Nightmare Update. 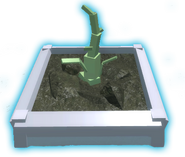 Stage 3 of Giant's Corn
Add a photo to this gallery
Retrieved from "https://fantastic-frontier-roblox.fandom.com/wiki/Giant%27s_Corn_(Plant)?oldid=92688"
Community content is available under CC-BY-SA unless otherwise noted.