Gardening can also be seen in The Nightmare, a realm that players can explore in the Ratboy's Nightmare Update. It is predominantly featured in The Plant Room, an area of The Nightmare where players may check on their gardening progress by viewing the gardening plots presented there. However, these plots cannot be used by the players and only act as a showcase of the 8 available plants in the game. These plots are also quite different from the ones in the Frontier, being raised up from the ground and containing only one bed.

Seeds are collectibles that can be bought from Mr. Sims, a seed vendor in the open market of Topple Hill. They can also be bought from Green Golem, a traveling vendor found in The Nightmare and sometimes in the Frontier. Some seeds may also be acquired as monster drops in The Nightmare. Seeds can be planted in plots of land each containing 4 beds. There are 5 plots and 20 beds in total, one plot in Topple Hill, in the market (very close to Mr. Sims), one plot in The Town of Right and Wrong, two plots in Farm Fortress, and one plot in the Abandoned Orchard. To unlock one of plots of land in Farm Fortress, the player must complete the Farm Fortress Defense Quest.

There are three different tiers of seeds, each representing one of the three slots in which they appear in Sims' Seed Supply:

The following seeds are obtainable, and all seeds available in the shop have varying prices that change between nights and other servers.

The following products can be harvested from the plants. Some of them can be used by the players, while others have no beneficial usages other than being sold. 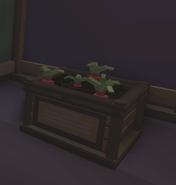 The Mandrake
Community content is available under CC-BY-SA unless otherwise noted.
Advertisement