In appearance, the Frontier Stargun resembles a sci-fi minigun. Several glowing crystals and stones on different parts of the machine possess colors that happen to be the main colors of the Frontier: red, blue, and yellow.

The Frontier Stargun consumes 2 stamina points per shot. If the player continues to hold their left-click button, it will result in the gun automatically firing bullets at its target. Its sole ammunition is Bullets; any other ammunition will not work with this weapon.

Like all rifle-type weapons, the Frontier Stargun has a "scope" function that can be activated by holding the right mouse button. 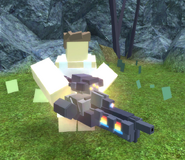 A player holding the Frontier Stargun
Community content is available under CC-BY-SA unless otherwise noted.
Advertisement