The Front Bullet Pack is a misc equipment that can be obtained in the Nightmare. It can be purchased from Rising Waters at a price of 1,200,000 gold. It may also be obtained as a possible reward from one of Giant Toad's Tasks.

As its description implies, it is a rather large backpack worn on the front of the player's torso, filled with absurd amounts of spare ammunition. There are many small pockets on the bullet pack which likely contain even more ammunition inside of it.

When equipped, the Front Bullet Pack provides the wearer with 5 additional points of ranged damage, slightly increasing the number of damage inflicted on opponents while using ranged weapons. Most importantly, it also provides 50% Ammo Return, which means that half of all bullets fired by the player are saved, making the pack an excellent item that easily pays for itself when used frequently with ranged weapons. All ammunition, both bullets, and non-bullets will be affected by the ammo return effect of the Front Bullet Pack. 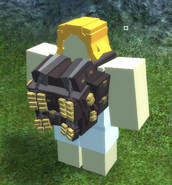 A player wearing the Front Bullet Pack, from a front-side angle.
Add a photo to this gallery
Retrieved from "https://fantastic-frontier-roblox.fandom.com/wiki/Front_Bullet_Pack?oldid=67397"
Community content is available under CC-BY-SA unless otherwise noted.