In appearance, the Firesoul Spellbook is a brown leather tome belonging to an Ignited Firesoul that are used to cast pyromancy spells. The artwork found at the center of the tome depicts a volcano erupting lava out of itself.

Like most magic spellbooks, it is a single projectile attack based spellbook. Despite its lack of unique traits, it is the currently the cheapest spellbook that can be acquired in the Frontier.

The base damage for the projectile attack is 60, and the left-click magic bonus received is 100%. While casting, the player's walkspeed multiplier is 65%. In perfect conditions, the Firesoul can fire 10 shots in 7 seconds, giving it a fire rate of roughly 86 shots per minute.

The special ability of the Firesoul Spellbook is titled 'Meteor Blast', which, upon activation, causes the player to stand still for 2 seconds as they call down a burning meteor from above to strike the location specified by the cursor, dealing 400 damage in a large area and receiving 250% of magic bonuses. It can be targeted at a much longer range than the standard attack - just before the fog fully obscures the map from view (with no sight bonuses). The special ability's cooldown lasts for 26 seconds (beginning after Meteor Blast finishes casting) before it can be used again.

The projectile from a Firesoul Spellbook. 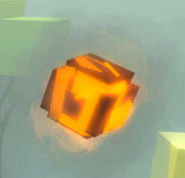 The meteor summoned from the special ability of the Firesoul Spellbook, Meteor Blast.
Community content is available under CC-BY-SA unless otherwise noted.
Advertisement