Fear is a standalone armor piece that can be obtained on the island of Matumada. It can be purchased from Construct at a price of 50,000,000 gold. Fear can also be obtained as a possible reward from one of Giant Toad's tasks.

In appearance, Fear is a dimensional item serving as the head of an unknown entity with antennas sticking outwards on the sides of the item. It appears to be composed of outlandish materials that may be influenced or crafted from some sorts of heat energies. Besides that, not much can be said about its overall appearance.

Once equipped, the players will experience an armor reduction of 16 armor points taking away from them, making them slightly weaker. To make up for the loss of armor points, the players will receive 200 additional points to melee damage-types and 100 additional points to magic damage-types, increasing the damage's outputs while using magic or melee weapons. 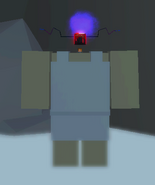 A player wearing Fear.
Add a photo to this gallery
Retrieved from "https://fantastic-frontier-roblox.fandom.com/wiki/Fear?oldid=78891"
Community content is available under CC-BY-SA unless otherwise noted.