Enables the players to be one of the many fantastic wanderers of the Frontier in other games outside of Fantastic Frontier.

The only way to obtain this item is redeeming it via a code from a purchased ROBLOX toy, specifically the ones provided at the end of this article.

It was officially discovered in stores by a user named Cap'n JadeFlames where they posted several toys that were available in stores during the month of February in the year, 2018.

An exclusive item that can only be obtained through a code from a ROBLOX toy. It cannot be sold nor can it be purchased through any means, with the exception of purchasing a ROBLOX toy in order to acquire this accessory.

The set seen in a local store, possibly in California. 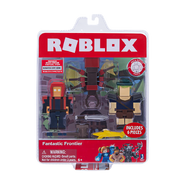 The set seen in roblox.jaswares.com
Add a photo to this gallery
Retrieved from "https://fantastic-frontier-roblox.fandom.com/wiki/Fantastic_Wanderer?oldid=39989"
Community content is available under CC-BY-SA unless otherwise noted.