The Emperor's Cape is a back equipment that can be acquired in the Nightmare. It can be purchased from the Green Golem, MANAGER SUPREME, or Rising Waters at a price of 1,100,000 gold. It can also be obtained as a possible 'rare' drop from The Cricket, the boss in The Theatre.

As its description, it is the cape of an eccentric ruler. The cape is made out of red 'regal' cloth with intricate patterns seen on the cape. It possesses a golden trim and a pair of gold and black lines running down the left side of the decal's appearance.

When equipped, the Emperor's Cape will remove 4 armor points, slightly decreasing the player's protection and making them vulnerable to mobs' attacks. In exchange for the armor decrease, the cape will provide 45 additional points to melee damage-type weapons, increasing the damage inflicted on opponents while using melee weapons. 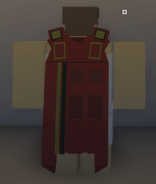 A player wearing the Emperor's Cape.
Add a photo to this gallery
Retrieved from "https://fantastic-frontier-roblox.fandom.com/wiki/Emperor%27s_Cape?oldid=62112"
Community content is available under CC-BY-SA unless otherwise noted.