The Dark Angel Wings is a back equipment that can be obtained in the Frontier. It can be purchased from Arbewhy in The Town of Right and Wrong at a price of 5,000,000 gold.

In appearance, it is a traditional pair of wings belonging to that of a dark angel, also known as a fallen angel. Other than that, not much can be said about its overall appearance.

When equipped, the Dark Angel Wings enables the wearer to fly. It will consume 5-6 stamina points. Endurance around 50% will drop stamina consumption down to 3-1 per jump. 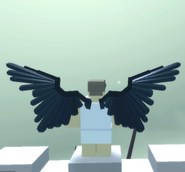 A player wearing the Dark Angel Wings.
Add a photo to this gallery
Retrieved from "https://fantastic-frontier-roblox.fandom.com/wiki/Dark_Angel_Wings?oldid=90009"
Community content is available under CC-BY-SA unless otherwise noted.