https://sketchfab.com/3d-models/caught-man-a3843eebe5f945fcbcf300cc971f862d
The Caught Man is a harvestable that can be found in the Nightmare. It can be found from various sources and locations throughout the Nightmare including but not limited to:

In appearance, the Caught Man is a humanoid figure with yellow/green skin, long arms, thin legs, and a blank, odd-looking expression on its face. Its attire is comprised of a pair of light-gray shorts, a red tie, a thin black belt, red gloves, white shirt, and black shoes. Players can exchange 1 Caught Man for 1 Meeting Remnant during Toaster Josh's "Manhunt". If the player has no purpose for the Caught Man, it can be sold for 88,000 gold.

The Caught Man can be found in various places in the Nightmare, specifically found in certain spots that include but are not limited to: 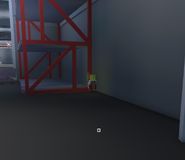 Caught man as sighted in The Supermarket.
Community content is available under CC-BY-SA unless otherwise noted.
Advertisement