The Arnold Slime Quest is a beginner-level quest that can be completed easily. The quest requires the player's patience to find the requirements in the Frontier. This quest may be essential to beginner players as it rewards a Pipe Rifle for those who are looking forward to ranged weapons. The quest requires the player to do a few numbers of objectives that may be time-consuming. 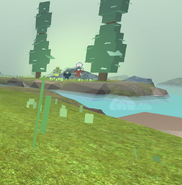 The fork of Rubble Riverstreams.

The waterfall of Topple Lake. (Also, why is this image file titled Hoodlum Falls..?) 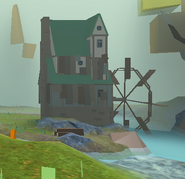 If you are unable to find Bandit Jack, use the stairways at the Gnome Magic School that leads to the Gnomes' home. Then, take an immediate right and tread down the path of the walls that overlooks Topple Hill. Once the player reaches a tower near the Gnome Magic School's gate entrance, they are now able to interact with Bandit Jack. Another way of finding Bandit Jack is with the assistance of jump-boosting/flight equipment, more specifically Jump Boots and/or Spider Stilts.

After the player travels back to Hoodlum Falls and hands over the response letter to Arnold Slime, Arnold Slime will state that you will not receive anything for being a mailman, however, Arnold Slime tasks the players to collect 15 balloon mushrooms (of any types; yellow/purple) as Bandit Jack requires the collectibles for whatever is being worked on. Arnold Slime offers a reward to the players if they do complete this objective.

After the players collect 15 Balloon Mushrooms, they must interact with Arnold Slime again to exchange it. The final reward of the quest rewards the players with a Pipe Rifle, a ranged weapon capable of inflicting 140 damage points on opponents. Players are also rewarded with 35 bullets that serve as ammunition.

Retrieved from "https://fantastic-frontier-roblox.fandom.com/wiki/Arnold_Slime_Quest?oldid=62583"
Community content is available under CC-BY-SA unless otherwise noted.