The 1.21 Update, also known as the Halloween Update, was a minor content update released on October 31, 2018. The Halloween Update serves as a minor extension of the Ratboy's Nightmare Update, including a new armor set known as the Guttermouth Set and balance changes. It also included an event NPC known as Jack-o'-lantern, who would hand out a Jack-o'-lantern (head accessory) to players. This head accessory was a limited-time item and will be re-obtainable by players the next time it is Halloween.

If you're looking for specific topics/subjects added during this update, please refer to the category, 1.21 (Halloween) Update (click the link). 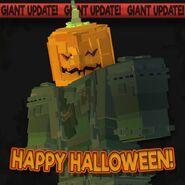 Showcase of the Guttermouth Set + Jack-o'-lantern.
Add a photo to this gallery

Retrieved from "https://fantastic-frontier-roblox.fandom.com/wiki/1.21_(Halloween)_Update?oldid=77650"
Community content is available under CC-BY-SA unless otherwise noted.